A Story of the Zones

Case Study -  A Matter of Life and Death

Positive Minds Partcipants - Please read about Alex Honnold and then complete the tasks at the bottom of the page
On 16th July 1969, Neil Armstrong became the first human to walk on another world. That achievement, also a life and death story, arose from the collective Growth Mindsets of thousands of people and is a story for another day. Forty-eight years later Alex Honnold completed a mountain climb that has been described as the ‘moon landing’ of free-soloing.
​
Free-soloing is climbing without ropes or any other equipment that may help or protect the climber. Alex became the first person to climb ‘El Captain’, a vertical rock face that is nine hundred meters high that is taller than the world’s highest building, the Burj Khalifa in Dubai.
Source: https://www.youtube.com/watch?v=96FUPTQeqYI

The Challenge of El Captain

​Most climbers consider El Capitan, located in Yosemite National Park in California, to be the centre of the rock-climbing world. Alex chose to take a difficult route called ‘Freerider’ up the rock face. It is usually big news when anyone climbs the Freerider even with ropes for safety. Alex’s climb involved unbelievable challenges such as following a path of cracks, some only big enough for his fingers to others gaping wide. Alex squeezed his body into tiny chimneys*, walked along ledges just as wide as a matchbox and hung from ledges with just his fingers.
​
As well as the physical needs of the climb, Alex also needed great mental strength. It requires incredible composure to undertake a complicated climbing manoeuvre hundreds on metres in the air. It is even more astonishing when you know that any mistake will almost certainly result in a horrific death.

Alex was thirty-one years old when he climbed El Capitan. He started climbing when he was eleven. Throughout those twenty years, Alex’s achievements grew until the free solo climb up El Capitan became the next natural target. He had thought about climbing this mountain for years and now he was ready for the challenge.
Source: www.nationalgeographic.com/adventure/features/athletes/alex-honnold/most-dangerous-free-solo-climb-yosemite-national-park-el-capitan/

​ Preparing for the climb

Alex’s entire climbing career has always been a preparation for his next challenge. He is famous for his extremely detailed preparation and training. For example, every other day he spends one hour hanging by his fingertips. Before he undertakes a climb he spends hours perfecting, rehearsing, and memorizing exact sequences of hand and foot placements for every part of the climb. He keeps detailed notes of his workouts and reflects after each climb, evaluating his performance in a detailed journal.

When Alex decided to make climbing the Freerider  route of El Capitan  his next goal he only told a few close friends and fellow climbers. These people were sworn to secrecy. He trained with these climbers for over a year in the United States, China, Europe and Morocco.

As well as training with trusted, skilled colleagues he climbed El Capitan more than sixty times and made detailed plans. He considered the moves he would make at each stage of the climb. Alex described how his planning helped him to achieve his goal. In fact, even though this was his most dangerous and challenging free-solo climb, it felt like the easiest because he had work so hard on his plans. According to Alex “There was no uncertainty on this climb. I knew exactly what to do the whole way. A lot of handholds felt like old friends." 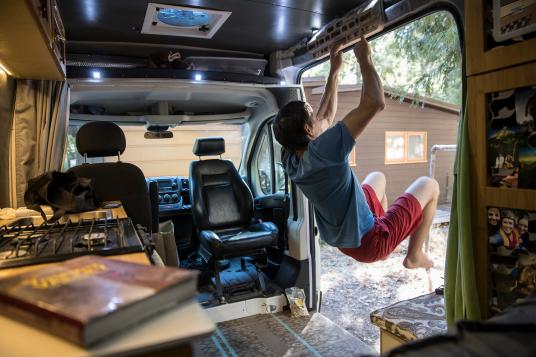 The climb did not always appear easy to Alex, at the beginning he was scared of the climb. “When I first mentally mapped out what it would mean to free-solo Freerider, there were a few places where I thought, ‘Oh that’s a scary move and that’s a really scary sequence’”
​
“There were so many little sections where I thought ‘Ughh—cringe.’ But in the years since, I’ve pushed my comfort zone and made it bigger and bigger until these objectives that seemed totally crazy at first eventually seemed possible to me.”

1. What are the personal characteristics and techniques of deliberate practice that helped Alex to achieve his goal?
Make a note of your answers. We will discuss them during the next session.
2. Please share a story of a person or people who have worked hard with deliberate practice to achieve their goals. You may wish to choose someone whose achievements you admire. They do not need to be ‘well-known’ people or have ‘famous’ achievements.

Now share your story on the Padlet link that your teacher sends to you. The choice of how you tell the story is yours.